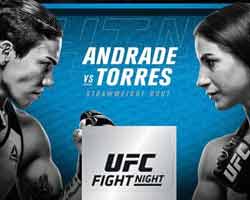 Review by AllTheBestFights.com: 2018-02-24, great performance by both fighters: Jessica Andrade vs Tecia Torres gets three stars.

Jessica Andrade entered this fight with a mma record of 17-6-0 (71% finishing rate) and she is ranked as the No.3 women’s strawweight in the world. ‘Bate Estaca’ Andrade fought three times in 2017 defeating Angela Hill (Andrade vs Hill) and Claudia Gadelha (Claudia Gadelha vs Jessica Andrade) but between these two bouts she lost to Joanna Jedrzejczyk (Jedrzejczyk vs Andrade).
Her opponent, the black belt in Brazilian jiu-jitsu and tae-kwon-do Tecia Torres, has an official record of 10-1-0 (10% submission victory rate – he has never won via ko/tko) and she entered as the No.9 in the same weight class. She lost the rematch with Rose Namajunas in 2016 (Rose Namajunas vs Tecia Torres 2) but then she has beat Bec Rawlings, Juliana Lima and Michelle Waterson. Andrade vs Torres is on the undercard of Josh Emmett vs Jeremy Stephens – UFC on Fox 28. Watch the video and rate this fight!

(Free embeddable video hosted on Youtube and not uploaded by AllTheBestFights)
https://www.youtube.com/watch?v=JZZWZfu5Xro