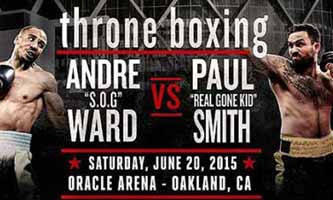 Review by AllTheBestFights.com: 2015-06-20, good finish but the rest of the fight was not so exciting: Andre Ward vs Paul Smith gets two stars.

The 2004 Olympic light heavyweight gold medalist and former Wbc and Wba super Mw champion, Andre Ward entered this fight with a perfect boxing record of 27-0-0 (14 knockouts) but he is not ranked as he hasn’t fought since November 16, 2013 when he defeated Edwin Rodriguez (=Ward vs Rodriguez).
His opponent, Paul Smith, has an official record of 35-5-0 (20 knockouts) and he entered as the No.31 super middleweight in the world but he comes off two consecutive defeats, both against Arthur Abraham (=Abraham vs Smith I and Abraham vs Smith II). Also Ward faced Abraham in his professional career winning in twelve rounds (May 14, 2011 Ward vs Abraham). ‘SOG’ Ward vs Smith is the main event of the evening. Watch the video and rate this fight!