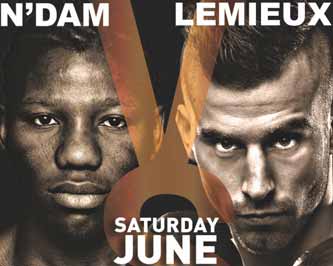 Review by AllTheBestFights.com: 2015-06-20, very nice fight thanks to a great performance by both boxers and four knockdowns: David Lemieux vs Hassan N’Dam N’Jikam is very close to get four stars!.

David Lemieux entered this fight with a professional boxing record of 33-2-0 (31 KOs=94%) and he is ranked as the No.9 middleweight in the world (currently the #1 in this division is Gennady Golovkin). He suffered two consecutive defeats in 2011 when he was just 22 years old: against Marco Antonio Rubio (=Rubio vs Lemieux) and Joachim Alcine (=Alcine vs Lemieux), but then he has won eight consecutive bouts beating Fernando Guerrero (=Lemieux vs Guerrero) and Gabriel Rosado in 2014 (=Lemieux vs Rosado).
His opponent, Hassan N’Dam N’Jikam, has an official record of 31-1-0 (18 knockouts) and he entered as the No.10 in the same weight class. He won the interim Wbo Mw belt in 2012 against Max Bursak (=N’Dam vs Bursak) but then he lost it to the undefeated Peter Quillin (=N’Dam vs Quillin); after that bout he has won four consecutive fights beating Curtis Stevens in his last one (=Stevens vs N’Dam). Lemieux vs N’Dam is valid for the vacant IBF World middleweight title. Watch the video and rate this fight!