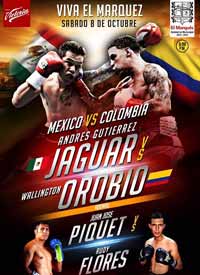 Review by AllTheBestFights.com: 2016-10-08, pretty good fight between Andres Gutierrez and Wallington Orobio: it gets three stars.

Andres Gutierrez entered this fight with a pro boxing record of 34-1-1 (24 knockouts) and he is ranked as the No.19 super featherweight in the world while his opponent, Wallington Orobio, has an official record of 17-1-0 (14 KOs=82%). Gutierrez has already fought twice in 2016 beating Manuel Dionisio Echenique (=Gutierrez vs Echenique) and losing to Cristian Mijares (via majority decision, Gutierrez vs Mijares). ‘Jaguarcito ‘ Gutierrez vs Orobio is the main event of the evening. Watch the video and rate this fight!