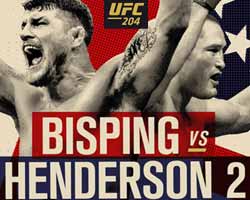 Review by AllTheBestFights.com: 2016-10-08, good pace with some nice exchanges: Michael Bisping vs Dan Henderson 2 gets three stars (UFC Fight of the Night).

The Ufc Mw champion Michael Bisping entered this fight with a professional record of 29-7-0 (69% finishing rate) and he is ranked as the No.1 middleweight in the world. He lost to Luke Rockhold in 2014 (=Rockhold vs Bisping I), but then he has won four bouts defeating Anderson Silva in February (=Silva vs Bisping) and taking revenge on Rockhold in June 2016 (=Rockhold vs Bisping 2).
His opponent, the 46-year-old (9 years older than Bisping) former Ufc Mw, Pride Mw and Strikeforce light-Hw champion Dan Henderson, has an official mma record of 32-14-0 (56% finishing rate) and he entered as the No.10 in the same weight class. He lost to Vitor Belfort last year (=Belfort vs Henderson 3) but he came back to win in 2016 against Hector Lombard (=Henderson vs Lombard). In their first bout Bisping was defeated by ‘Hendo’ via ko (July 11, 2009); Bisping vs Henderson 2, main event of the Ufc 204, is valid for the Ufc middleweight title (Bisping’s first defense). Watch the video and rate this fight!