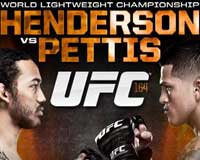 Review: 2013-08-31, the second fight between Benson Henderson and Anthony Pettis gets three stars thanks to a good finish (UFC Submission of the Night). Benson Henderson (19-2-0, 53% finishing rate) entered as the No.1 lightweight in the world while Anthony Pettis (16-2-0, 82% finishing rate) entered as the No.5. In their first fight Pettis defeated Henderson by unanimous decision and that is the last loss of ‘Bendo’ (December 16, 2010); this second fight, main event of UFC 164, is valid for the UFC lightweight title (Henderson’s fourth defense). Watch the video!