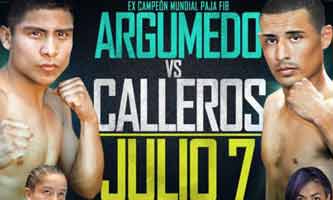 Review by AllTheBestFights.com: 2018-07-07, fight not particularly good between Jose Argumedo and Moises Calleros: it gets two stars.

The former Ibo minimumweight champion Jose Argumedo entered this fight with a pro boxing record of 21-4-1 (13 knockouts) and he is ranked as the No.12 light flyweight in the world. He lost to Hiroto Kyoguchi last year (Jose Argumedo vs Hiroto Kyoguchi) but he came back to win in 2018 with Edgar Cibrian.
His opponent, Moises Calleros, has a record of 28-8-1 (16 knockouts) and he entered as the No.17 minimumweight but he comes off the loss against Ryuya Yamanaka (Ryuya Yamanaka vs Moises Calleros); before this bout, in 2017, he had beat Samuel Garcia. Argumedo vs Calleros is the main event of the evening. Watch the video and rate this fight!