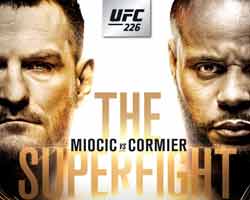 Review by AllTheBestFights.com: 2018-07-07, good fight between Stipe Miocic and Daniel Cormier: it gets three stars (UFC Performance of the Night).

The Ufc Hw champion Stipe Miocic entered this fight with a mma record of 18-2-0 (78% ko/tko victory rate – he has never won via submission) and he is ranked as the No.1 heavyweight in the world. He suffered his last loss when he faced Junior dos Santos in their first bout in 2014 (via unanimous decision, dos Santos vs Miocic), after this fight he has collected six victories winning the Ufc belt against Fabricio Werdum (Werdum vs Miocic) and defending it with Alistair Overeem (Miocic vs Overeem), Junior dos Santos in their second bout (Miocic vs dos Santos 2) and Francis Ngannou (Stipe Miocic vs Francis Ngannou).
His opponent, the former Strikeforce Hw and current Ufc light-Hw champ Daniel Cormier, has an official record of 20-1-0 (65% finishing rate) and he entered as the No.1 light heavyweight. ‘DC’ suffered his only loss against Jon Jones in their first fight in 2015 (Jones vs Cormier I), since then he has won five bouts beating Anderson Silva in 2016 (Cormier vs Silva), Anthony Johnson in 2017 (Cormier vs Johnson 2) and Volkan Oezdemir in 2018 (Daniel Cormier vs Volkan Oezdemir). In 2017 he had also faced Jon Jones for the second time losing via KO, but then the result was overturned in a no-contest since ‘Bones’ tested positive for Turinabol (Cormier vs Jones 2). Miocic vs Cormier, main event of Ufc 226, is valid for the Ufc heavyweight title (Miocic’s fourth defense). Watch the video and rate this fight!

(Free embeddable video hosted on Youtube and not uploaded by AllTheBestFights)
https://www.youtube.com/watch?v=kc5VIMFN6Pg