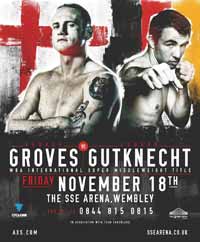 Review by AllTheBestFights.com: 2016-11-18, pretty good fight between George Groves and Eduard Gutknecht: it gets three stars.

George Groves entered this fight with a professional boxing record of 24-3-0 (18 KOs=75%) and he is ranked as the No.3 super middleweight in the world (currently the #1 in this division is Gilberto Ramirez). He lost to Badou Jack last year (via split decision, Groves vs Jack) but then he has won three consecutive bouts beating Martin Murray in his last one (=Murray vs Groves).
His opponent, Eduard Gutknecht, has an official record of 30-4-1 (13 knockouts) and he entered as the No.54 in the same weight class. He has fought twice in 2016 losing to Juergen Braehmer (=Braehmer vs Gutknecht 2) and winning over Artem Redko. Groves vs Gutknecht is valid for the WBA International super middleweight title. Watch the video and rate this fight!