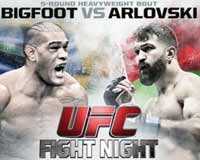 Review: 2014-09-13, pretty good finish between Antonio Silva and Andrei Arlovski: their second fight gets three stars (UFC Performance of the Night). The black belt in shotokan karate, judo and Bjj Antonio ‘Bigfoot’ Silva entered this fight with a professional mma record of 18-5-1 (89% finishing rate) and he is ranked as the No.4 heavyweight in the world, he fought three times last year beating Alistair Overeem (=Overeem vs Silva), then he was defeated by #1 Cain Velasquez (=Velasquez vs Silva 2) and he drew against Mark Hunt in one of the most exciting fights of 2013 (=Silva vs Hunt).
His opponent, the former Ufc Hw champion (from 2005 to 2006) Andrei Arlovski, has an official record of 22-10-0 (82% finishing rate) and he entered as the No.14 in the same weight class, he suffered his last defeat in 2013 when he faced Anthony Johnson at Wsof 2 (=Arlovski vs Johnson) but after that bout he won three consecutive fights, just the last one in the Ufc, against Brendan Schaub (=Schaub vs Arlovski). In their first fight ‘Bigfoot’ Silva defeated Arlovski by unanimous decision (May 15, 2010); this second fight is the main event of UFC Fight Night 51 (UFC Fight Night Brasilia). Watch the video and rate this fight!