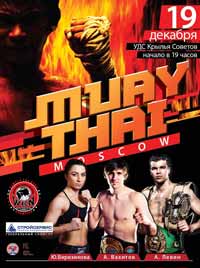 Review by AllTheBestFights.com: 2015-12-19, Artem Levin vs Daniel Alexandru gets three stars only thanks to a good finish.

The Glory Mw and former WBC muay thai champion Artem Levin entered this fight with a kickboxing record of 88-7-2 (34 knockouts) and he is ranked as the No.1 cruiserweight in the world while his opponent, Daniel Alexandru, has an official record of 20-6-0 (12 knockouts). Levin suffered his last defeat in 2013 when he faced Joe Schilling (final of the Glory 10 Mw tournament), since then he has collected 12 victories (taking revenge on Schilling in 2014 and winning the Glory Mw title, Schilling vs Levin 2) and one draw, against Simon Marcus in 2015 (=Levin vs Marcus 2). Levin vs Alexandru, main event of Muay Thai Moscow, is valid for the WKN World super light heavyweight (-85.5 kg) Muay Thai championship title. . Watch the video and rate this fight!