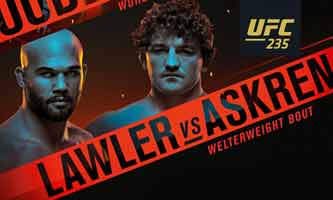 Review by AllTheBestFights.com: 2019-03-02, great fight between Robbie Lawler and Ben Askren: it is close to get four stars!

The former Ufc Ww champion Robbie Lawler entered this fight with a mma record of 28-12-0 (75% finishing rate) and he is ranked as the No.9 welterweight in the world but he lost two out of his last three fights, against current #1 Ufc Ww champion Tyron Woodley in 2016 (Lawler vs Woodley) and with Rafael dos Anjos at the end of 2017 (Robbie Lawler vs Rafael dos Anjos); between these two bouts he beat Donald Cerrone (Lawler vs Cerrone).
His opponent, the undefeated former Bellator Ww and ONE FC champ Ben Askren, has a perfect record of 18-0-0 (61% finishing rate) but he is not ranked as he hasn’t fought since November 24, 2017 when he defeated Shinya Aoki (Ben Askren vs Shinya Aoki); before this bout, in 2017, he had also beat Agilan Thani (Askren vs Thani) and Zebaztian Kadestam (Askren vs Kadestam). Lawler vs Askren is on the undercard of Jon Jones vs Anthony Smith – UFC 235. Watch the video and rate this fight!