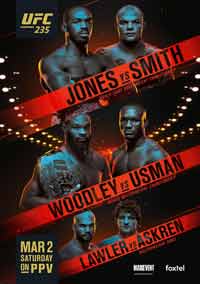 Review by AllTheBestFights.com: 2019-03-02, fight not particularly good between Tecia Torres and Weili Zhang: it gets two stars.

The black belt in karate and tae-kwon-do Tecia Torres entered this fight with a professional record of 10-3-0 (10% submission victory rate – she has never won via ko/tko) and she is ranked as the No.10 women’s strawweight in the world but she comes off two consecutive defeats, against Jessica Andrade (Jessica Andrade vs Tecia Torres) and Joanna Jedrzejczyk (Joanna Jedrzejczyk vs Tecia Torres); before these fights, in 2017, she had beat Michelle Waterson.
Her opponent, Weili Zhang, has a mma record of 18-1-0 (89% finishing rate) and she entered as the No.7 in the same weight class. She suffered her only loss when she faced Meng Bo at her professional mma debut in 2013, since then she has won 18 consecutive bouts beating Danielle Taylor and Jessica Aguilar in 2018. Torres vs Zhang is on the undercard of Jon Jones vs Anthony Smith – UFC 235. Watch the video and rate this fight!