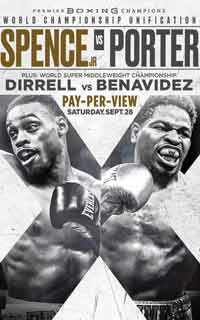 Review by AllTheBestFights.com: 2019-09-28, pretty good fight between Batyr Akhmedov and Mario Barrios: it gets three stars.

Both undefeated, the Olympian Batyr Akhmedov entered this fight with a perfect boxing record of 7-0-0 (6 KOs=86%) and he is ranked as the No.32 super lightweight in the world while his opponent, Mario Barrios, has a record of 24-0-0 (16 knockouts) and he entered as the No.48 in the same weight class. In their last three fights Akhmedov has won over Ismael Barroso, Viktor Plotnikov and Francisco Gabriel Pina while Barrios has beat Jose Roman, Richard Zamora and Juan Jose Velasco. Akhmedov vs Barrios is valid for the vacant WBA World super-lightweight title; undercard of Errol Spence Jr vs Shawn Porter. Watch the video and rate this fight!