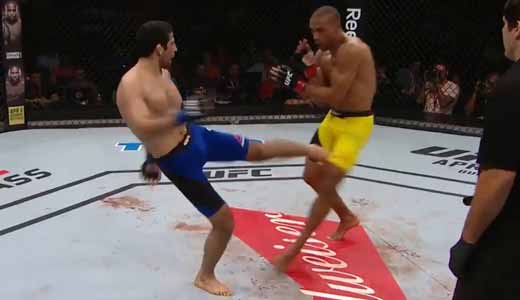 Review by AllTheBestFights.com: 2017-03-11, nice exchanges and spectacular finish: Edson Barboza vs Beneil Dariush is one of the best mma fight of 2017 and it gets four stars (UFC Performance of the Night).

The black belt in tae-kwon-do Edson Barboza entered this fight with a mma record of 18-4-0 (61% finishing rate) and he is ranked as the No.5 lightweight in the world (currently the #1 in this division is Conor McGregor). He lost to Tony Ferguson in 2015 (=Ferguson vs Barboza) but then he has beat Anthony Pettis (=Pettis vs Barboza) and Gilbert Melendez (=Barboza vs Melendez).
His opponent, the black belt in Bjj Beneil Dariush, has an official record of 14-2-0 (64% finishing rate) and he entered as the No.9 in the same weight class. He has fought three times in 2016 losing to Michael Chiesa and winning over James Vick and Rashid Magomedov (=Dariush vs Magomedov). Edson Barboza vs Beneil Dariush is on the undercard of Vitor Belfort vs Kelvin Gastelum – UFC Fight Night 106. Watch the video and rate this fight!