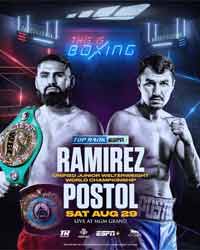 Review by AllTheBestFights.com: 2020-08-29, some good exchanges between Arnold Barboza Jr and Tony Luis but it is not enough to get three stars: it gets two.
The undefeated Arnold Barboza Jr entered this fight with a perfect boxing record of 23-0-0 (10 knockouts) and he is ranked as the No.13 super lightweight in the world. He fought three times last year winning over Mike Alvarado, Ricky Sismundo and William Silva.
His opponent, Tony Luis, has an official record of 29-3-0 (10 knockouts) and he entered as the No.68 in the same weight class. He lost to Derry Mathews in 2015 (Derry Mathews vs Tony Luis) but since then he has collected ten consecutive victories defeating Adrian Estrella and Ricardo Lara in his last two. Luis vs Barboza is on the undercard of Jose Carlos Ramirez vs Viktor Postol. Watch the video and rate this fight!