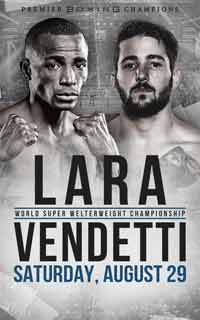 Review by AllTheBestFights.com: 2020-08-29, pretty good fight between Erislandy Lara and Greg Vendetti: it gets three stars.
The former Ibo and Wba super-Ww champion Erislandy Lara entered this fight with a pro boxing record of 26-3-3 (15 knockouts) and he is ranked as the No.2 super welterweight in the world (currently the #1 in this division is Jermell Charlo). He lost to Jarrett Hurd in 2018 (Erislandy Lara vs Jarrett Hurd), then he fought twice in 2019, drawing with Brian Carlos Castano (Erislandy Lara vs Brian Carlos Castano) and defeating Ramon Alvarez (Erislandy Lara vs Ramon Alvarez).
His opponent, Greg Vendetti, has a record of 22-3-1 (12 knockouts) and he entered as the No.43 in the same weight class. He was defeated by Michel Soro in 2018 (Michel Soro vs Greg Vendetti) but then he has won over Alan Zavala and Michael Anderson. Vendetti vs Lara is valid for the WBA and vacant IBO World super welterweight titles. Watch the video and rate this fight!