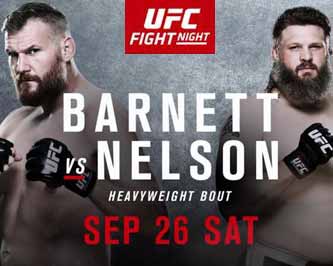 Review by AllTheBestFights.com: 2015-09-26, some good exchanges between Josh Barnett and Roy Nelson but it is not enough to get three stars, it gets two (UFC Fight of the Night).

The honorary black belt in Brazilian jiu-jitsu and former Ufc Hw champion Josh Barnett entered this fight with a professional mma record of 33-7-0 (85% finishing rate) but he is not ranked as he hasn’t fought since December 28, 2013 when he was defeated by Travis Browne (=Barnett vs Browne).
His opponent, the black belt in Bjj Roy Nelson, has an official record of 20-11-0 (90% finishing rate) and he entered as the No.15 heavyweight in the world but he lost four out of his last five bouts, the last one against Alistair Overeem (=Overeem vs Nelson). Barnett vs Nelson is the main event of the UFC Fight Night 75. Watch the video and rate this fight!