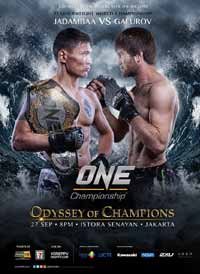 Review by AllTheBestFights.com: 2015-09-27, fight not so exciting between Marat Gafurov and Martin Nguyen: it gets two stars.

Both undefeated, Marat Gafurov entered this fight with a perfect mma record of 11-0-0 (73% finishing rate) and he is ranked as the No.24 featherweight in the world while his opponent, Martin Nguyen (who replaces Narantungalag Jadambaa), has an official record of 4-0-0 (100% finishing rate). Gafurov vs Nguyen main event of “One Championship: Odyssey of Champions”, is valid for the interim ONE featherweight title. Watch the video and rate this fight!

Event: One Championship: Odyssey of Champions