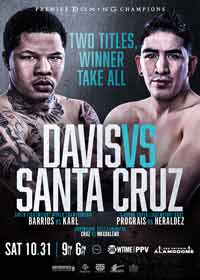 Review by AllTheBestFights.com: 2020-10-31, pretty good fight between Mario Barrios and Ryan Karl: it gets three stars.
The undefeated Wba super-Lw champion Mario Barrios entered this fight with a perfect boxing record of 25-0-0 (16 knockouts) and he is ranked as the No.9 super lightweight in the world (currently the #1 in this division is Josh Taylor). In his last three fights he has won over Richard Zamora, Juan Jose Velasco and Batyr Akhmedov (Batyr Akhmedov vs Mario Barrios).
His opponent, Ryan Karl, has an official record of 18-2-0 (12 knockouts) and he entered as the No.99 welterweight. He lost to Kevin Watts in 2018 but then he has won three fights taking revenge on Watts and beating David Morales and Bergman Aguilar. Karl vs Barrios is valid for the WBA World super-lightweight title; undercard of Gervonta Davis vs Leo Santa Cruz. Watch the video and rate this fight!