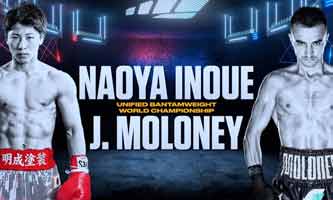 Review by AllTheBestFights.com: 2020-10-31, good fight between Naoya Inoue and Jason Moloney: it gets three stars.
The undefeated world champion in three different weight classes Naoya Inoue entered this fight with a perfect record of 19-0-0 (16 KOs=84%) and he is ranked as the No.1 bantamweight in the world. In his last three bouts ‘Monster’ Inoue has won over Juan Carlos Payano (Naoya Inoue vs Juan Carlos Payano), Emmanuel Rodriguez (Naoya Inoue vs Emmanuel Rodriguez) and Nonito Donaire (The Ring magazine Fight of the Year 2019, Naoya Inoue vs Nonito Donaire).
His opponent, Jason Moloney, has a boxing record of 21-1-0 (18 KOs=86%) and he entered as the No.7 in the same weight class. He suffered his only loss when he faced Emmanuel Rodriguez in 2018 (via split decision, Emmanuel Rodriguez vs Jason Moloney), but since then he has won four consecutive bouts defeating Dixon Flores and Leonardo Baez in his last two (Jason Moloney vs Leonardo Baez). Moloney vs Inoue is valid for the WBA and IBF World bantamweight titles. Watch the video and rate this fight!