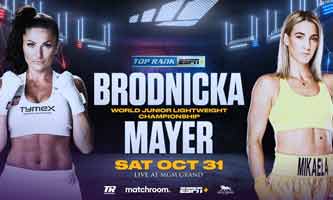 Review by AllTheBestFights.com: 2020-10-31, fight not so exciting between Ewa Brodnicka and Mikaela Mayer: it gets two stars.
Both undefeated, the Wbo super-Fw champion Ewa Brodnicka entered this fight with a perfect boxing record of 19-0-0 (2 knockouts) and she is ranked as the No.5 women’s super featherweight in the world while her opponent, the former Olympian Mikaela Mayer, has an official record of 13-0-0 (5 knockouts) and she entered as the No.4 in the same weight class. In their last three bouts Brodnicka has won over Janeth Perez, Edith Soledad Matthysse and Djemilla Gontaruk while Mayer has beat Lizbeth Crespo, Alejandra Soledad Zamora and Helen Joseph. Mayer vs Brodnicka is valid for the WBO World Female super-featherweight title, undercard of Naoya Inoue vs Jason Moloney. Watch the video and rate this fight!