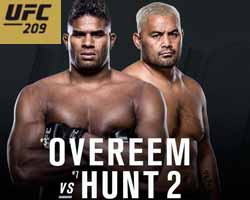 Review by AllTheBestFights.com: 2017-03-04, pretty good finish between Alistair Overeem and Mark Hunt but it is not enough to get three stars: it gets two.

The former K-1, Strikeforce and Dream world champion Alistair Overeem entered this fight with a mma record of 41-15-0 (90% finishing rate) and he is ranked as the No.4 heavyweight in the world. ‘The Reem’ fought twice last year beating Andrei Arlovski (=Overeem vs Arlovski) and losing to current #1 Ufc Hw champion Stipe Miocic (=Miocic vs Overeem).
His opponent, the 42-year-old (Overeem is six years younger) former K-1 world champion Mark Hunt, has an official record of 12-10-1 (75% ko/tko victory rate – he has never won via submission) and he entered as the No.6 in the same weight class. He suffered two consecutive losses between 2014 and 2015, against Fabricio Werdum (=Werdum vs Hunt) and Stipe Miocic (=Hunt vs Miocic), but then he came back to win against Antonio ‘Bigfoot’ Silva (=Hunt vs Silva 2) and Frank Mir (=Hunt vs Mir). After this bout he lost to Brock Lesnar but then the result was overturned in a no-contest since the WWE wrestler tested positive for clomiphene (=Lesnar vs Hunt). In their first bout Overeem defeated Hunt via submission (July 21, 2008); this second fight is on the undercard of Tyron Woodley vs Stephen Thompson 2 – UFC 209. Watch the video and rate this fight!