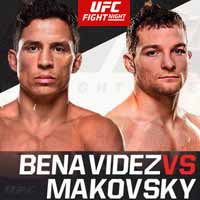 Review by AllTheBestFights.com: 2016-02-06, disappointing fight between Joseph Benavidez and Zach Makovsky: it gets two stars.

Joseph Benavidez entered this fight with a professional record of 23-4-0 (65% finishing rate) and he is ranked as the No.2 flyweight in the world. He suffered his last loss when he faced Demetrious Johnson in their rematch in 2013 (=Johnson vs Benavidez 2), since then he has won four consecutive bouts beating Ali Bagautinov in his last one (=Benavidez vs Bagautinov).
His opponent, the former Bellator Bw champion Zach Makovsky, has a mma record of 19-6-0 (37% finishing rate) and he entered as the No.9 in the same weight class but he comes off the loss against John Dodson (=Dodson vs Makovsky). Benavidez vs Makovsky is on the undercard of Johny Hendricks vs Stephen Thompson – UFC Fight Night 82. Watch the video and rate this fight!