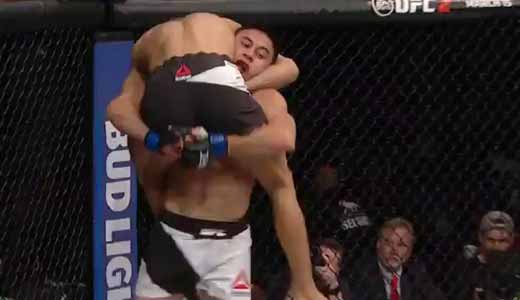 Review by AllTheBestFights.com: 2016-02-06, good work on the ground and spectacular finish: Noad Lahat vs Diego Rivas gets four stars (UFC Performance of the Night).

The black belt in Bjj and judo Noad Lahat entered this fight with a record of 9-1-0 (67% finishing rate) and he is ranked as the No.59 featherweight in the world. He suffered his only loss in 2014 when he faced Godofredo ‘Pepey’ Castro, after this bout he has won over Steven Siler and Niklas Backstrom.
His opponent, the undefeated Diego Rivas, has an official mma record of 6-0-0 (67% finishing rate) but he is not ranked as he hasn’t fought since November 8, 2014 when he beat Rodolfo Rubio Perez. Lahat vs Rivas is on the undercard of Johny Hendricks vs Stephen Thompson – UFC Fight Night 82. Watch the video and rate this fight!