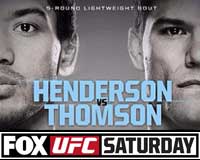 Review: 2014-01-25, fight not so exciting between Benson Henderson and Josh Thomson: it gets two stars. The black belt in taekwondo and Brazilian jiu-Jjtsu Benson Henderson entered this fight with a professional mma record of 19-3-0 (53% finishing rate) and he is ranked as the No.2 lightweight in the world, he lost the Ufc lightweight title in his last fight against against Anthony Pettis who had already defeated ‘Smooth’ Henderson in 2010 (bout valid for the WEC Lw title). His opponent Josh Thomson, black belt in Guerilla Jiu-Jitsu (= martial arts system combining Bjj, judo and wrestling founded by Dave Camarillo), has an official record of 20-5-0 (70% finishing rate) and he entered as the No.9 in the same weight class, he lost two out of his last four fights. Currently the #1 in this division is Anthony Pettis. Henderson vs Thomson is the main event of UFC on Fox 10. Watch the video and rate this fight!