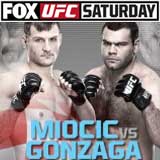 Review: 2014-01-25, good single shots but the fight was not particularly good: Gabriel Gonzaga vs Stipe Miocic gets two stars. The black belt in bjj Gabriel Gonzaga entered this fight with a pro mma record of 16-7-0 (100% finishing rate) and he is ranked as the No.14 heavyweight in the world, last year he fought four times losing only to Travis Browne. Stipe Miocic has a record of 10-1-0 (80% finishing rate, he has won just once via submission) and he entered as the No.11 in the same weight class, in 2013 he fought only once winning against Roy Nelson. ‘Napao’ Gonzaga vs Miocic is on the undercard of Benson Henderson vs Josh Thomson – UFC on Fox 10. Watch the video and rate this fight!