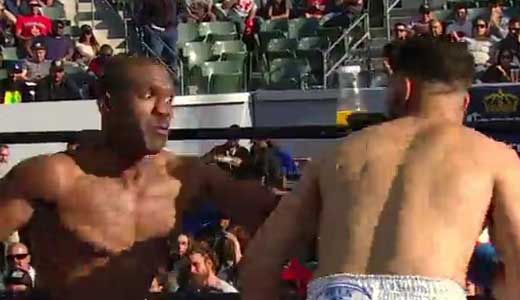 Review by AllTheBestFights.com: 2016-04-30, wild exchanges and spectacular finish: Edwin Rodriguez vs Thomas Williams Jr is one of the best boxing fights of the year 2016 and it gets four stars!

Edwin Rodriguez entered this fight with a pro record of 28-1-0 (19 knockouts) and he is ranked as the No.15 cruiserweight in the world. He suffered his only loss when he faced Andre Ward in 2013 (=Ward vs Rodriguez), since then he has won four consecutive bouts beating Michael Seals in his last one (4-stars fight Rodriguez vs Seals).
His opponent, Thomas Williams Jr, has a boxing record of 19-1-0 (13 knockouts) and he entered as the No.33 light heavyweight. He lost to Gabriel Campillo in 2014 (=Williams vs Campillo) but then he has won over Michael Gbenga and Umberto Savigne (=Williams Jr vs Savigne). ‘La Bomba’ Rodriguez vs Williams is on the undercard of Victor Ortiz vs Andre Berto 2. Watch the video and rate this fight!