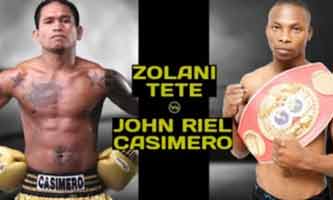 Review by AllTheBestFights.com: 2019-11-30, fight not so exciting between Zolani Tete and John Riel Casimero: it gets two stars.

The former world champion in two different weight classes Zolani Tete entered this fight with a professional record of 28-3-0 (21 KOs=75%) but he is not ranked as he hasn’t fought since October 13, 2018 when he defeated Mikhail Aloyan (Zolani Tete vs Mikhail Aloyan). He suffered his last loss when he faced Roberto Domingo Sosa in 2012 (Sosa vs Tete), since then he has won 12 consecutive bouts beating also Omar Andres Narvaez before facing Aloyan (Zolani Tete vs Omar Andres Narvaez).
His opponent, the world champion in three different weight classes John Riel Casimero, has a boxing record of 28-4-0 (19 knockouts) and he entered as the No.5 bantamweight in the world (currently the #1 in this division is Naoya Inoue). He lost to Jonas Sultan in 2017 (John Riel Casimero vs Jonas Sultan) but then he has won four fights defeating Ricardo Espinoza Franco (John Riel Casimero vs Ricardo Espinoza Franco) and Cesar Ramirez in his last two (John Riel Casimero vs Cesar Ramirez). Tete vs Casimero is valid for the WBO World bantamweight title; undercard of Lerrone Richards vs Lennox Clarke. Watch the video and rate this fight!