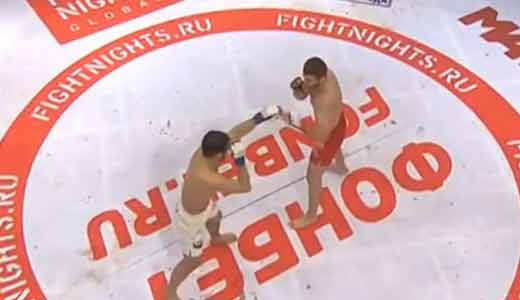 Review by AllTheBestFights.com: 2018-02-22, spectacular finish between Akhmed Aliev and Magomedsaygid Alibekov: this is one of the best mma fights of 2018 and it gets four stars!

Akhmed Aliev entered this fight with a professional mma record of 16-4-0 (56% ko/tko victory rate – he has never won via submission) and he is ranked as the No.22 lightweight in the world. He lost to Vener Galiev in 2015 but since then he has won seven consecutive bouts beating Efrain Escudero and Diego Brandao in 2017.
His opponent, the undefeated Magomedsaygid Alibekov, has a perfect record of 9-0-0 (33% finishing rate) and in his last three fights he has won over Matej Truhan, Nariman Abbasov and Kuat Khamitov. Aliev vs Alibekov, main event of Fight Nights Global 83, is valid for the FNG lightweight title. Watch the video and rate this fight!