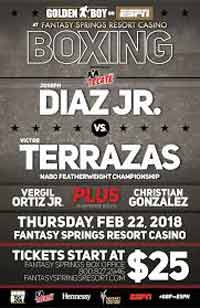 Review by AllTheBestFights.com: 2018-02-22, good exchanges between Joseph Diaz and Victor Terrazas: it gets three stars.

The undefeated olympian Joseph Diaz entered this fight with a perfect boxing record of 25-0-0 (13 knockouts) and he is ranked as the No.9 featherweight in the world (currently the #1 in this division is Leo Santa Cruz). He fought twice last year winning over Manuel Avila (Diaz vs Avila) and Rafael Rivera (Joseph Diaz vs Rafael Rivera).
His opponent, the former Wbc super-Bw champion Victor Terrazas, has an official record of 38-4-2 (21 knockouts) and he entered as the No.62 super featherweight but he won just one out of his last four bouts, against Crisitan Arrazola in 2016; after this fight he lost to Eduardo Hernandez and tied with Andoni Gago. JoJo Diaz vs Terrazas is valid for the WBO NABO featherweight title. Watch the video and rate this fight!