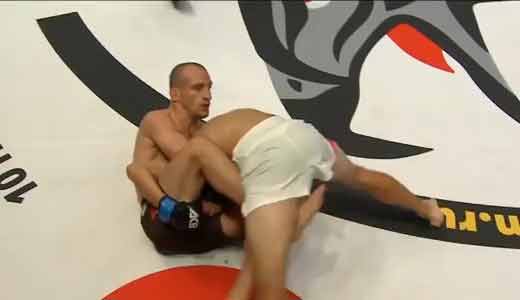 Review by AllTheBestFights.com: 2018-09-08, some good exchanges and an amazing finish: Goga Shamatava vs Pavel Pastushkov is one of the best mma fights of 2018 and it gets four stars!

Goga Shamatava entered this fight with a professional mma record of 12-4-0 (92% finishing rate) and he is ranked as the No.82 bantamweight in the world. He suffered two consecutive losses in 2014, against Viktor Kichigin and Vugar Mamedzade, but then he has won ten fights beating Mitchell Cadeau, Raymison Bruno Souza De Oliveira and Diego Silva in 2017.
His opponent, Pavel Pastushkov, has an official record of 3-1-0 (67% ko/tko victory rate – he has never won via submission) and he suffered his only defeat last year when he faced Bislan Shekhetel, after this bout he has beat Viktor Bundeev and Aslan Khaladov. Shamatava vs Pastushkov is on the undercard of Abdul Aziz Abdulvakhabov vs Ali Bagov – ACB 89. Watch the video and rate this fight!