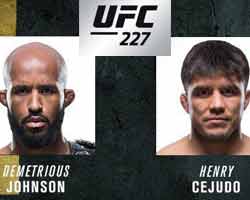 Review by AllTheBestFights.com: 2018-08-04, pretty good fight between Demetrious Johnson and Henry Cejudo 2: it gets three stars (UFC Fight of the Night).

The Ufc Flw champion Demetrious Johnson entered this fight with a pro mma record of 27-2-1 (59% finishing rate) and he is ranked as the No.1 flyweight in the world. ‘Mighty Mouse’ suffered his last loss when he faced Dominick Cruz in 2011 (Cruz vs Johnson), since then he has collected one draw and 13 consecutive victories beating Wilson Reis (Johnson vs Reis) and Ray Borg in 2017 (Demetrious Johnson vs Ray Borg).
His opponent, the 2008 Olympic freestyle wrestling gold medalist Henry Cejudo, has a record of 12-2-0 (42% finishing rate) and he entered as the No.2 in the same weight class. He lost two consecutive bouts in 2016, against Demetrious Johnson in their first bout (Johnson vs Cejudo I) and with Joseph Benavidez (via split decision, Benavidez vs Cejudo) but then he has won over Wilson Reis (Cejudo vs Reis) and Sergio Pettis (Henry Cejudo vs Sergio Pettis). Johnson vs Cejudo 2 is valid for the Ufc flyweight title; undercard of TJ Dillashaw vs Cody Garbrandt 2 – UFC 227. Watch the video and rate this fight!

(Free embeddable video hosted on Youtube and not uploaded by AllTheBestFights)
https://www.youtube.com/watch?v=iBn150PCC20