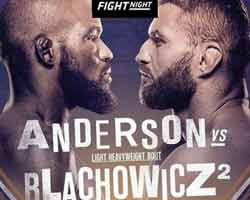 Review by AllTheBestFights.com: 2020-02-15, pretty good finish between Corey Anderson and Jan Blachowicz 2: it gets three stars (UFC Performance of the Night).

The Tuf 19 tournament winner Corey Anderson entered this fight with a professional mma record of 13-4-0 (38% ko/tko victory rate – he has never won via submission) and he is ranked as the No.9 light heavyweight in the world (currently the #1 in this division is Jon Jones). He lost two consecutive bouts in 2017, with Jimi Manuwa (Manuwa vs Anderson) and Ovince St Preux (Ovince St Preux vs Corey Anderson) but then he has won four fights beating Johnny Walker in his last one (Corey Anderson vs Johnny Walker).
His opponent, the black belt in Bjj and former Ksw light-Hw champion Jan Blachowicz, has an official record of 25-8-0 (60% finishing rate) and he entered as the No.5 in the same weight class. He has fought three times in 2019 losing to Thiago Santos (Jan Blachowicz vs Thiago Santos) but then he beat Luke Rockhold (Luke Rockhold vs Jan Blachowicz) and Ronaldo Jacare Souza (Jan Blachowicz vs Ronaldo Jacare Souza). In their first bout Anderson defeated Blachowicz via unanimous decision (September 5, 2015 – Jan Blachowicz vs Corey Anderson); this second fight is the main event of UFC Fight Night 167. Watch the video and rate this fight!