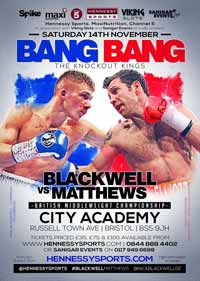 Review by AllTheBestFights.com: 2015-11-14, good performance by both fighters: Nick Blackwell vs Jack Arnfield gets three stars.

Nick Blackwell entered this fight with a professional boxing record of 18-3-1 (8 knockouts) and he is ranked as the No.23 middleweight in the world. He lost to Max Bursak in 2013, but since then he has collected five victories and one draw.
His opponent, Jack Arnfield, has an official record of 19-1-0 (4 knockouts) and he suffered his first defeat in February, against Cello Renda (via split decision), after this bout he came back to win beating Deividas Sajauka. Blackwell vs Arnfield is valid for the BBBofC British middleweight title. Watch the video and rate this fight!