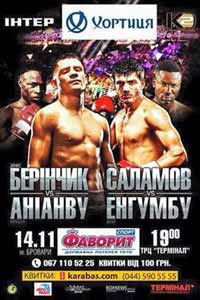 Review by AllTheBestFights.com: 2015-11-14, pretty boring fight between Umar Salamov and Doudou Ngumbu: it gets two stars.

Umar Salamov entered this fight with a boxing record of 13-0-0 (11 KOs=85%) and he is ranked as the No.55 light heavyweight in the world while his opponent, Doudou Ngumbu, has an official record of 34-6-0 (13 knockouts) and he entered as the No.44 in the same weight class. Both boxers have fought once in 2015: Salamov has defeated Tomas Adamek while Ngumbu has beat Andrejs Pokumeiko; before this bout Ngumbu had lost to Andrzej Fonfara (=Fonfara vs Ngumbu). Salamov vs Ngumbu is valid for the WBO European light heavyweight title. Watch the video and rate this fight!