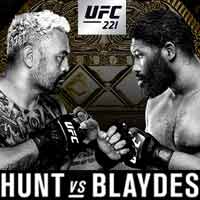 Review by AllTheBestFights.com: 2018-02-11, disappointing fight between Mark Hunt and Curtis Blaydes: it gets two stars.

(Free embeddable video hosted on facebook and not uploaded by AllTheBestFights)