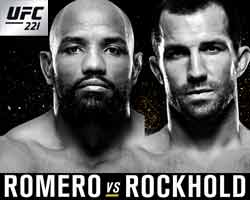 Review by AllTheBestFights.com: 2018-02-11, Yoel Romero vs Luke Rockhold gets three stars only thanks to a good finish.

The black belt in Brazilian jiu-jitsu, former Strikeforce and Ufc Mw champion Luke Rockhold entered this fight with a professional mma record of 16-3-0 (87% finishing rate) and he is ranked as the No.3 middleweight in the world (currently the #1 in this division is Georges St Pierre). Rockhold fought twice against former Ufc Mw champion Michael Bisping winning their first bout in 2014 (Rockhold vs Bisping) but then he lost the rematch in 2016 (Rockhold vs Bisping 2); after this fight he came back to win in 2017 against David Branch (Luke Rockhold vs David Branch).
His opponent, Yoel Romero Palacio, has an official record of 12-2-0 (83% ko/tko victory rate – he has never won via submission) and he entered as the No.5 in the same weight class. He beat Chris Weidman in 2016 (Weidman vs Romero) but then he was defeated by Robert Whittaker (Yoel Romero Palacio vs Robert Whittaker). Yoel Romero vs Rockhold, main event of the UFC 221, is valid for the interim UFC middleweight title (belt at stake only for Rockhold since at the weigh-ins Romero came in at 187.7 lbs, 2.7 pounds over the Mw limit). Watch the video and rate this fight!

(Free embeddable video hosted on Youtube/Facebook and not uploaded by AllTheBestFights)
https://www.youtube.com/watch?v=6O80FUg6Q0A