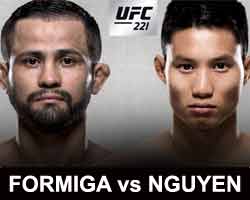 Review by AllTheBestFights.com: 2018-02-11, Jussier Formiga vs Ben Nguyen gets three stars only thanks to a good finish (UFC Performance of the Night).

The black belt in Bjj and judo Jussier Formiga da Silva entered this fight with a record of 20-5-0 (45% submission victory rate – he has never won via ko/tko) and he is ranked as the No.5 flyweight in the world (currently the #1 in this division is Demetrious Johnson). He fought twice last year losing to Ray Borg (Jussier Formiga vs Ray Borg) and defeating Yuta Sasaki (Jussier Formiga vs Yuta Sasaki).
His opponent, the black belt in tae-kwon-do Ben Nguyen, has a mma record of 16-6-0 (81% finishing rate) and he entered as the No.6 in the same weight class. He lost to Louis Smolka in 2016 (Smolka vs Nguyen) but then he has won over Geane Herrera (Nguyen vs Herrera) and Tim Elliott (Tim Elliott vs Ben Nguyen). Formiga vs Nguyen is on the undercard of Yoel Romero vs Luke Rockhold – UFC 221. Watch the video and rate this fight!