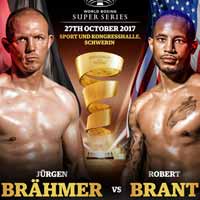 Review by AllTheBestFights.com: 2017-10-27, good fight between Rob Brant and Juergen Braehmer: it gets three stars.

The former Wbo and Wba light-Hw champion Juergen Braehmer entered this fight with a professional boxing record of 48-3-0 (35 knockouts) but he is not ranked as he hasn’t fought since October 1, 2016 when he suffered an elbow injury during the fight with Nathan Cleverly (=Braehmer vs Cleverly); before this bout he had won over Eduard Gutknecht in March (=Braehmer vs Gutknecht 2).
His opponent, the undefeated Rob Brant, has a perfect record of 22-0-0 (15 knockouts) and he entered as the No.27 middleweight in the world. In his last three fights he has beat Delray Raines, Chris Fitzpatrick and Alexis Hloros. Robert Brant vs Braehmer, WBC super middleweight title eliminator, is the quarter final of the World Boxing Super Series super-mw tournament. Watch the video and rate this fight!