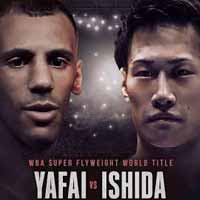 Review by AllTheBestFights.com: 2017-10-28, disappointing fight between Khalid Yafai and Sho Ishida: it gets two stars.

Both undefeated the Wba super-Flw champion Khalid Yafai entered this fight with a perfect boxing record of 22-0-0 (14 knockouts) and he is ranked as the No.3 super flyweight in the world (currently the #1 in this division is Srisaket Sor Rungvisai) while his opponent, Sho Ishida, has an official record of 24-0-0 (13 knockouts) and he entered as the No.21 in the same weight class. In their last three fights Kal has beat Johnson Tellez, Luis Concepcion (=Concepcion vs Yafai) and Suguru Muranaka (=Yafai vs Muranaka) while Ishida has defeated Ryuichi Funai, Phetnamnung Sisaketphattana and Patiphon Saithonggym. Kal Yafai vs Ishida is valid for the WBA World super flyweight title (Yafai’s second defense); undercard of Anthony Joshua vs Carlos Takam. Watch the video and rate this fight!