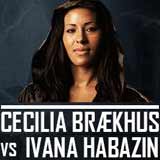 Review: 2014-09-13, pretty good fight between Cecilia Braekhus and Ivana Habazin: it gets three stars. The undefeated Cecilia Braekhus entered this fight with a perfect record of 25-0-0 (7 knockouts) and she is ranked as the No.1 women’s welterweight in the world, she has already fought twice in 2014 beating Myriam Lamare in February (=Braekhus vs Lamare) and Jessica Balogun in June.
Her opponent, Ivana Habazin, has an official record of 13-1-0 (5 knockouts) and she entered as the No.9 in the same weight class, she suffered her only defeat in 2013 when she faced Eva Halasi (whom was beat in just three rounds by Braekhus in 2010); after that loss Habazin won three consecutive fights and the vacant IBF female welterweight title in her last bout, against Sabrina Giuliani. Braekhus vs Habazin is valid for the WBA, WBC, WBO, IBF female welterweight titles (all belt held by Braekhus, except for the Ibf). Watch the video and rate this fight!