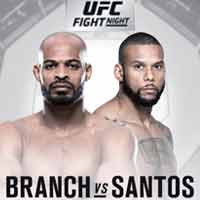 Review by AllTheBestFights.com: 2018-04-21, fight not so exciting between David Branch and Thiago Santos: it gets two stars (UFC Performance of the Night).

The black belt in Bjj, former Wsof light-Hw and Mw champion David Branch entered this fight with a mma record of 21-4-0 (57% finishing rate) and he is ranked as the No.14 middleweight in the world. He fought twice last year defeating Krzysztof Jotko (Krzysztof Jotko vs David Branch) and losing to Luke Rockhold (Luke Rockhold vs David Branch).
His opponent, Thiago Santos, has an official record of 17-5-0 (76% finishing rate) and he entered as the No.17 in the same weight class. Thiago ‘Marreta’ lost twice in 2016, against Gegard Mousasi (Mousasi vs Santos ) and Eric Spicely, but then he has won four bouts defeating Anthony Smith in 2018 (Thiago Santos vs Anthony Smith). Branch vs Santos is on the undercard of Edson Barboza vs Kevin Lee – UFC Fight Night 128. Watch the video and rate this fight!

(Free embeddable video hosted on Youtube and not uploaded by AllTheBestFights)
https://www.youtube.com/watch?v=UdhdB1ZmqiM