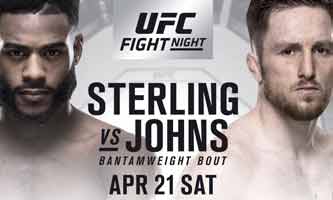 Review by AllTheBestFights.com: 2018-04-21, some good exchanges between Brett Johns and Aljamain Sterling but it is not enough to get three stars: it gets two.

The undefeated black belt in judo Brett Johns entered this fight with a perfect record of 15-0-0 (47% finishing rate) and he is ranked as the No.13 bantamweight in the world. He fought twice last year winning over Albert Morales and Joe Soto (Joe Soto vs Brett Johns).
His opponent, Aljamain Sterling, has a mma record of 14-3-0 (57% finishing rate) and he entered as the No.12 in the same weight class but he lost three out of his last five bouts, the last one with Marlon Moraes (Aljamain Sterling vs Marlon Moraes); before this fight he had beat Renan Barao (Sterling vs Barao). Johns vs Sterling is on the undercard of Edson Barboza vs Kevin Lee – UFC Fight Night 128. Watch the video and rate this fight!

(Free embeddable video hosted on Youtube and not uploaded by AllTheBestFights)
https://www.youtube.com/watch?v=t57G-D6DZPw