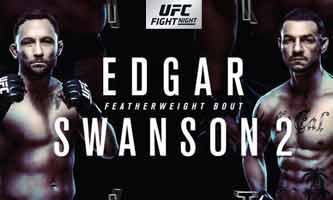 Review by AllTheBestFights.com: 2018-04-21, pretty good fight between Frankie Edgar and Cub Swanson 2: it gets three stars.

The black belt in Brazilian jiu-jitsu and former Ufc Lw champion Frankie Edgar entered this fight with a pro mma record of 22-6-1 (50% finishing rate) and he is ranked as the No.4 featherweight in the world (currently the #1 in this division is Max Holloway) while his opponent, the black belt in Bjj and judo Cub Swanson, has a record of 25-8-0 (60% finishing rate) and he entered as the No.13 in the same weight class. Both fighters have lost their last bout with Brian Ortega (Frankie Edgar vs Brian Ortega and Cub Swanson vs Brian Ortega). Before losing Edgar had beat Yair Rodriguez (Frankie Edgar vs Yair Rodriguez) while Swanson won over Artem lobov (Cub Swanson vs Artem Lobov). In their first fight Edgar had beat Swanson by submission (November 22, 2014 – Frankie Edgar vs Cub Swanson I); this second fight is on the undercard of Edson Barboza vs Kevin Lee – UFC Fight Night 128. Watch the video and rate this fight!

(Free embeddable video hosted on Youtube and not uploaded by AllTheBestFights)
https://www.youtube.com/watch?v=B1CUSoZtGrI