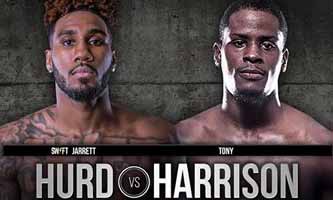 Review by AllTheBestFights.com: 2017-02-25, Jarrett Hurd vs Tony Harrison gets three stars only thanks to a good finish.

The undefeated Jarrett Hurd entered this fight with a perfect boxing record of 19-0-0 (13 knockouts) and he is ranked as the No.15 super welterweight in the world. He fought twice last year winning over Oscar Molina and Ionut Dan Ion (=Hurd vs Dan).
His opponent, Tony Harrison, has an official record of 24-1-0 (20 KOs=83%) and he entered as the No.11 in the same weight class. He suffered his only loss when he faced Willie Nelson in 2015 (=Nelson vs Harrison), after this bout he has won over Cecil McCalla (=Harrison vs McCalla), Fernando Guerrero and Sergey Rabchenko (=Harrison vs Rabchenko). Jarrett Hurd vs Tony Harrison is valid for the vacant IBF World super welterweight title; undercard of Deontay Wilder vs Gerald Washington. Watch the video and rate this fight!