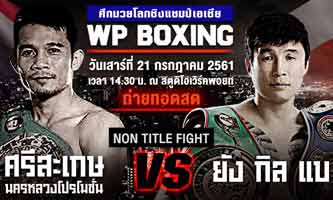 The Wbc super-Flw champion Srisaket Sor Rungvisai (also known as Wisaksil Wangek) entered this fight with a pro boxing record of 45-4-1 (40 KOs=89%) and he is ranked as the No.1 super flyweight in the world. He suffered his last loss when he faced Carlos Cuadras in 2014 (Rungvisai vs Cuadras), since then he has won 17 consecutive bouts defeating Roman Gonzalez twice in 2017 (4-stars fight, Gonzalez vs Rungvisai I and Srisaket Sor Rungvisai vs Roman Gonzalez II) and Juan Francisco Estrada in 2018 (Srisaket Sor Rungvisai vs Juan Francisco Estrada).
His opponent, Young Gil Bae, has a record of 28-6-2 (22 KOs=79%) but he is not ranked as he hasn’t fought since April 22, 2017 when he tied with Kittisak Boonchaiming. Before this fight he had beat Wanchai Nianghansa in February 2017 and lost to Rex Tso in 2016 (Rex Tso vs Young Gil Bae). Rungvisai vs Bae is the main event of the evening. Watch the video and rate this fight!