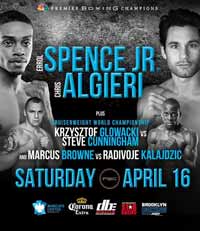 Review by AllTheBestFights.com: 2016-04-16, close fight but with too many interruptions: Marcus Browne vs Radivoje Kalajdzic gets two stars.

Both undefeated, the American Marcus Browne entered this fight with a perfect boxing record of 17-0-0 (13 KOs=76%) and he is ranked as the No.15 light heavyweight in the world while his opponent, Radivoje Kalajdzic, has an official record of 21-0-0 (14 knockouts) and he entered as the No.75 cruiserweight. Both boxers fought four times last year and in their last bout Browne beat Francisco Sierra while Kalajdzic won over Fabio Garrido. Browne vs Kalajdzic is valid for the vacant WBC United States (USNBC) light heavyweight title; undercard of Errol Spence Jr vs Chris Algieri. Watch the video and rate this fight!