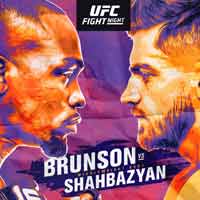 Review by AllTheBestFights.com: 2020-08-01, good fight between Derek Brunson and Edmen Shahbazyan: it gets three stars.
Derek Brunson entered this fight with a professional mma record of 20-7-0 (70% finishing rate) and he is ranked as the No.11 middleweight in the world. He lost consecutive bouts in 2018, against Ronaldo Jacare Souza (Ronaldo Jacare Souza vs Derek Brunson 2) and Israel Adesanya (Derek Brunson vs Israel Adesanya), but then he has won over Elias Theodorou (Derek Brunson vs Elias Theodorou) and Ian Heinisch (Derek Brunson vs Ian Heinisch).
His opponent, the undefeated Edmen Shahbazyan, has a perfect record of 11-0-0 (91% finishing rate) and he entered as the No.21 in the same weight class. In his last three fights he has beat Charles Byrd, Jack Marshman and Brad Tavares. Shahbazyan vs Brunson is the main event of UFC Fight Night 173 (also known as UFC on ESPN+ 31 or UFC Vegas 5). Watch the video and rate this fight!