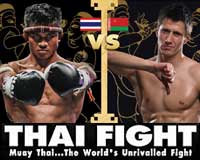 Review: 2012-12-16, the fight between Buakaw Por Pramuk and Vitaly Gurkov was a little disappointing: two stars. Buakaw Por Pramuk, now Buakaw Banchamek, (207-21-12) entered as the No.2 super welterweight in the world while Vitaly Gurkov, also known as Vitaly Hurkou, (90-12-0) entered as the No.14 middleweight. Buakaw vs Gurkov is the 70kg final of Thai Fight 2012; main event of the evening. Watch the video!